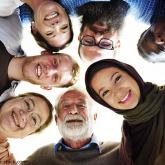 Are you a good neighbour?

Our cities are getting more diverse. But how do we create a melting pot where we grow stronger together, rather than a more divided society in danger of overheating?

The #ShareNeighbourhoods track of the 2018 Forum will explore ways to encourage all  everyone living in the EU to pull together and thrive – not just survive.

Ordinary people, like you and me, have human rights, too. We experience those rights first hand in our street, neighbourhood or workplace.

Protecting and promoting those human rights requires us all to be active citizens: good neighbours that encourage everyone to get involved in the community.

The Dutch have ‘civic integration’ exams, in Germany they offer ‘integration courses’ and for the French it is ‘contracts of welcome and integration’.

But, with the exception of courses in the host language, how effective are they really? They appear more designed to allay public fears than a proven way to promote immigrant integration.

The end result cannot be measured by good intentions, but by actions. And the 2018 Forum will share ideas to inspire action from all EU citizens to build more inclusive communities.

Many attendees at the Forum paint a gloomy picture of the human rights situation in their own neighbourhoods. So there is a lot of work to be done.

Michael McEachrane of the European Network of People of African Descent explains: “People of African descent are particularly subjected to discrimination across Europe. Sweden, where I live, is no exception to this.

“It shows itself in the rates of so-called afrophobic hate crimes, disparate levels of employment compared to educational attainment and so on.

“There are many indicators that racial segregation and other forms of racial inequities have only become worse in recent years, too.”

Film and documentary director Els van Driel warns: “In the Netherlands we are rapidly shifting towards more xenophobia and racism.

“There is a white man's view of our society and room for diversity is under pressure, as it is in most European countries. I am still hopeful, but we really need to raise our voices.”

But there is hope according to Emily Binchy, of the European Data Protection Supervisor. She says: “I am extremely proud of the recent developments in Ireland’s human rights field.

“Three main stories of liberation spring to mind; the eventual smoothing over of bitter tensions between different religious denominations among the population of Northern Ireland constituting possibly the greatest success story of our recent past.

“More recently, the landmark achievement of being the first country to democratically legalise gay marriage was a triumph of unparalleled euphoria and remains a great source of national pride due to the overwhelming majority with which it passed.

“And unforgettably, a few short months ago, with the repealing of the 8th amendment to the constitution and consequential lifting of a quasi-outright prohibition on abortion, the granting of bodily autonomy to the women of Ireland.”

You can join the debate on social media, using the hashtag #RightsForum18 and follow regular updates on this website.