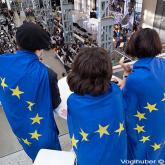 “Not only is the situation for the protection of human rights globally still of great concern. It has arguably worsened,” said Michael O’Flaherty, Forum Chair and FRA Director, opening the Fundamental Rights Forum 2018.

“Our task is to marshal our anger into the formulation of new ideas and strategies for making the European Union the fair, just, and decent society we want.

Alexander Van der Bellen, Austria’s President, was similarly worried: “The commitment to human rights is being eroded in the face of global threats.

“The EU and its Member States are struggling to find effective answers to problems people face.

“There is a serious risk that people in the EU are losing their sense of belonging to the societies they live in and the values on which the EU is built.”

Part of the problem is the rise of nationalism or rather “the bad version of nationalism”, as European Justice Commissioner Věra Jourová described it. “The one promoting exclusion and hatred.”

This is fuelling hatred and racial discrimination. Here Commissioner Jourová cited recent data that pointing four anti-Semitic incidents per day in France, UK and Germany as an example.

“We have to offer a familiar alternative to the people. In my view, we should promote healthy patriotism, based on inclusion, but also about nurturing the feeling of familiar community,” she said.

It is all the more worrying as it is not just a niche issue.

“Dangerous trends are not only visible in the rising popularity of the extreme parties. Sadly, the mainstream parties accept some part of this exclusive rhetoric,” warned the Commissioner.

“Mainstream parties accept some part of this rhetoric of division.” It is spilling over from the margins to the centre.

This is despite the EU’s Charter of Fundamental Rights, its strong legal framework and dedicated human rights defenders.

She feels that there is not enough resistance from the media, politicians or opinion leaders.

This is where the Fundamental Rights Forum can come in.

The good news is that we have the right tools in place, said Claude Moraes, Chair of the European Parliament’s Civil Liberties, Justice, Home Affairs Committee. But “we need to be smart about the protection of human rights,” and think ahead to the future.

This means not just relying on a ‘sledgehammer’-type approach like the recent Article 7 procedure against Hungary. A proper Rule of Law measure could help but it should be applied before fundamental rights breaches occur.

A common understanding and common standards to counter the current lack of trust was important for Christos Giakoumopoulos, the Council of Europe’s Human Rights and Rule of Law Director General.

The EU’s accession to the European Convention on Human Rights the European Social Charter would underline the EU’s commitment to human rights, he added.

This was a view also shared by Anna Rurka, President of the Council of Europe’s Conference of International Non-governmental Organisations and Ingibjörg Sólrún Gísladóttir, OSCE Office for Democratic Institutions and Human Rights’ Director.

Anna was worried that civil society is being seen as enemies of the people, as enemies of government: “Democratic institutions are disconnected from citizens.”

She felt that civil society needs more support from EU and international institutions. This includes funding and being actively involved in effective, binding consultations.

Peggy also spoke of the EU’s important role as a standard-bearer for rights: “Europe has the eyes of the world on them.”

Whenever one country takes a stance, others will see as a justification to do the same. Whatever it does, other countries follow, so “[Europe] needs to get the tough questions right.”

On a more positive note, the FRA Director spoke of how “across Europe and elsewhere, there is a new vibrancy to the discussion of what it takes to build and sustain healthy societies.

“Our friends and neighbours may well have other perspectives and priorities; they may neither think nor act in the language and categories of human rights. But we must engage with them respectfully.

“Above all, we must never give up because of the responsibility we hold, the accountability we owe to past, present, and future generations.

"An open society can only be maintained if we are willing to fight for it", said Commissioner Jourová quoting Vienna-born Karl Popper.

“And fight we must, but we have to fight smart,” she said.

“We have to remember that the world is not black and white and we have to keep our both feet firmly on the ground.

“We must humbly ask the people to trust us again and promote the hope the Charter brings.

“We need to renew ownership for fundamental rights and values and renew our societal contract for what they mean and for what they stand for.”