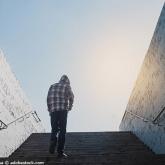 I have a dream … to be a helpful, active part of society

Moatasem Althafea studies at Vienna’s Economics and Business University. Like other students, he has an active social life. But his story could have been so different.

He is also a refugee from Iraq.

Of those that arrive thousands are kept in receptions centres awaiting processing that can take months. Some centres are overcrowded and living conditions are poor, as FRA regularly reports in its overviews of human rights in those countries most affected by migration.

When Moatasem arrived in Austria it was difficult. He didn’t know anyone and didn’t know what to do nor where to start. Although he spoke English, it wasn’t enough to fully integrate into Austrian society.

That changed when he learnt German. “Language is a key to open the door to society in a country,” he says.

It helped him get involved in Austrian life. Whenever he had the chance to take part in activities he pitched in and made new friends.

The migrant support group, IntegrationHaus, in Vienna also helped greatly. They helped him take his first steps and always supported him. For example, they provided housing and paid for his language courses. What he has achieved today is down to them, he says.

The cities where migrants settle play a vital role in integration.

“Cities can develop policies that are more migrant-friendly,” says Lefteris Papagiannakis, Vice-Mayor of Athens in charge of migration.

It is the only city in Greece that has a dedicated Vice-Mayor focusing on migrants and refugees.

This in itself is important. It shows political will and the commitment of the city towards migrants.

And Athens’ efforts are being recognised. In 2017, its mayor, Georgios Kaminis, was awarded the third best mayor in the world for its work on refugees and offering them safety, shelter and support.

“Cities can mainstream discussions in municipalities for the existence of refugees,” says Lefteris.

“They can help fight xenophobia, stay positive and have a strong political position against people who are basically racist.”

Athens is developing a whole array of policies offering services for migrants and refugees. It is also collaborating with and coordinating civil society organisations that offer such services, avoiding duplication.

They have developed a strategic plan for local integration which they are also sharing with other cities and municipalities in Greece.

Alongside the regular social services that migrants can use, they have also rolled out specific services just for newly-arrived migrants. This underlines their commitment and recognises migrants’ specific needs, such as translation or more time to explain procedures.

Cites often need to fill the gap left by the State. It has been a challenge, admits Lefteris, but they acknowledged early on that they hadn’t worked on integration before.

Athens’ efforts have created a bond of trust between the city and refugees.

It took some time, says Lefteris: “They feel at ease when they come to us. They feel safe, which for them is very, very important”.

It has also had an impact on the public. Of course, they are those who remain negative, but those who are willing understand what a city like Athens needs to do, have reacted positively.

This echoes the view of Moatasem. He acknowledges the fundamental need to change the hearts and minds of the public towards refugees.

In Vienna, it is less of a problem. There are many opportunities to meet refugees through the work of NGOs and events helping to bridge the divide.

Elsewhere in Austria it is different, he adds: “They don’t many have any idea of what the refugees want or why they are here.

“They only know what they hear from the news or from TV and that’s not always the right thing.”

In his experience, when he meets people from outside Vienna, perceptions change. He hears them unexpectedly say, “refugees are really nice people. They are just like us!”

That’s why he believes it is vital to have more events across the country to allow refugees and local communities get to know each other. This would really help change how they are viewed by society.

He would like to help change that image: “I dream of being a helpful, active part of society.”

To hear more about the challenges to successful integration and what is needed, follow the Forum’s Reality Bites session on 26 September.