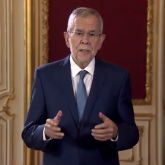 Seventy years ago, the world agreed that “dignity and the equal and inalienable rights of all members of the human family is the foundation of freedom, justice and peace”. So why do we struggle to live up to that vision today?

The Universal Declaration of Human Rights of 1948 set out, for the first time, fundamental human rights to be universally protected – to be enjoyed by all people, no matter who they are or where they live. It became the gold standard for rights the world over.

But the optimism of the years that followed the end of the Second World War and scrapping of Apartheid is starting to wane.

Now, almost three-quarters of a century later, Vienna will host crucial debates on the most pressing human rights issues of our time, as rights around the globe are under attack. The Fundamental Rights Forum 2018 will consider how Europe can live up to that vision.

Austrian President Alexander Van der Bellen, the 2018 Forum’s patron, warns: “The commitment to Human Rights is being eroded in the face of global threats.”

He adds: “The blurring of facts, fiction and fears in public debate is increasingly contributing to growing polarisation, which in turn is exploited by populist movements.

“This results increasingly in groups being separated, excluded and put to the margins of our societies.

“There is a serious risk that people in the EU are losing their sense of belonging to the societies they live in and the values on which the EU is built.”

Human rights are threatened by anti-press rhetoric, fake news and vulnerable groups being singled out for the sake of political gain.

Crumbling commitment among world powers to fighting abuses is attributed to a growing lack of concern about human rights.

Europe is gripped by the Syrian refugee crisis. More than half a million people have been killed in seven years of violence. But has our response always been humanitarian?

We live in a world where German-Turkish football star Mesut Özil feels forced to quit the national team because: “I am German when we win, but I am an immigrant when we lose.”

Anti-racism activist Ali Can, who was prompted by Özil’s decision to launch the #MeTwo debate on Twitter, told his followers: “The public debate has started… Thank you!”

Ali will be joining scores of other campaigners, politicians and victims of abuse sharing their opinions and ideas at the 2018 Forum, from 25 to 27 September.

The Forum will explore concrete solutions to make fundamental rights a reality for everyone.

It unites more than 500 thought leaders from not just human rights organisations but also the arts, business and sports communities to help create a melting pot of innovative ideas. The Forum will develop strategies to safeguard rights and shape future policy.

Over three days in diverse sessions, attendees will share their stories and discuss new perspectives on pressing human rights issues.

The Forum has been divided into six tracks:

Sessions will cover everything from protecting the rule of law to how sport can create inclusive societies. They will address rights issues for all minorities and responsibilities for the majority.

You can join the debate on social media, using these hashtags and the event hashtag, #RightsForum18, and follow regular updates on this website.