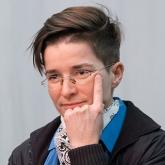 Lesbian, gay, bisexual, trans- and intersex people and queers are persecuted in over 70 countries; they are threatened by physical, psychological and sexualized violence, and coerced to live a hidden life or are forced to marry. In the hope of a better life, they leave and migrate to countries where they expect to receive protection and a sense of normality.

Since at least 1991 in Austria, LGBTIQ people can request asylum under the title of being ‘member of a social group’. Back then Austria acknowledged LGBTIQ as members of a social group in the notes accompanying asylum law. An EU directive made this interpretation explicit in 2013. But, like in any other asylum cases, personal experiences of persecution must be proven.

Reliability and credibility of sexual orientation or gender identity is the key point during the process. This has resulted in very questionable testing methods, e.g. in the Czech Republic pornographic material was shown to see if the applicant gets aroused. It was very common for interviewers to ask intimate details concerning sexual practices. This even went as far as refugees having to provide photo or video evidence of engaging in sex to prove their sexual orientation. The European Court for Human Rights prohibited such intimate interrogation methods in 2014. Furthermore, the Court also outlawed the denial of asylum assuming that refugees could resettle within their country of origin, and hide or not live as a homosexual or trans-person. To expect LGBTIQ people not to live their sexuality goes against basic human rights and could have repercussions for many refugees.

Even though the legal prerequisites have improved in the last few years, there are still structural problems. These add to the general difficulties of asylum law and procedures in Austria, which exacerbate the challenges LGBTIQ refugees face. For example, refugees have to state the reason for fleeing in their first interview with Austrian officials. Talking about sexual orientation or gender identity is generally difficult, particularly so during asylum applications; remaining silent about the true reasons can complicate the process.

Depending on personal experiences, some refugees have good reason not to be open to a police official. Another obstacle is the so-called community interpreters, native speakers that are allowed to interpret in asylum procedures after attending a crash course. Some of them are either unprepared to interpret; some are bluntly homo- or transphobic. Many refugees are afraid to come out in front of somebody from their country of origin. Sometimes interpreters even spread false information: we know from refugees that some community interpreters have wrongly stated that sexual orientation is no ground for asylum in Austria.

The latest amendment of the Asylum Act increases the hurdles for traumatised and LGBTIQ refugees particularly because of the planned fast track procedures at the borders. Many refugees will be sent back to other EU countries where no support for LGBTIQ refugees is provided. Some LGBTIQ refugees, especially from Syria, try to come as normal war refugees. However, Austria has just announced that it intends to reopen every positive decision after three years to check if the reasons for flight are still valid. It could happen that the war is over, but the LGBTIQ situation remains. There are also problems in attempting to declare states like Morocco, Egypt, Tunisia or Turkey as safe countries (Drittstaaten) as Germany did. Without the possibility of an individual asylum procedure it will be impossible for LGBTIQ asylum seekers to claim their rights.

But even an asylum application in Austria does not mean that your rights are upheld. This has to do with the special situation and vulnerability of LGBTIQ people: many are harassed, mobbed, beaten and sexually assaulted in their shelters. Some leave their shelters in the provinces of Austria to go and search for support in Vienna. The result? They lose their state-funded social benefit (housing, food, healthcare is provided as long as you stay in the appointed shelter).

Due to these problems, a group of activists from the Viennese LGBTIQ community gathered and lobbied for specific care for LGBTIQ refugees. For years the LGBTIQ community centre Türkis Rosa Lila Villa has run an apartment for refugees. However, it was clear that the community alone cannot and should not take on a state responsibility. In negotiation with City Council activists, an agreement was reached with the public administration. This ensures access to social benefit for all LGBTIQ refugees and provides financial support for a specialised organisation. In August 2015 Queer Base was founded by refugees and activists alike and started to provide safe shelter (partly in cooperation with Diakonie), legal advice, coming out and peer-to-peer counseling, a buddy system and German courses.

Marty Huber is a queer-feminist activist at Türkis Rosa Lila Villa, co-founder of Queer Base, a lecturer at the University for Fine Arts, Vienna and a cultural worker.

Queer Base – Welcome and Support for LGBTIQ Refugees is an organisation in Vienna (Austria) by people with and without the experience of flight. The aim is to support lesbian, gay, bisexual, trans- and intersex people during and after their asylum application in Austria.